Give Root Privileges to a User

usermod command in Linux is used to modify the user account. Using usermod command we can assign groups, permissions to a specific user. There are mainly 7 groups in the Linux file system, these are as follows:

To add a user to root using usermod, we have to run the following command in the terminal.

Here, the –G flag stands for Group and the root is the group for new user1.

To add an existing user to the root group, follow the following command:

Here, the -g flag stands for Group id, and 0 represents the root group id, and the -o flag is for the existing user.

useradd command can be used to create a new user or update default new user information. It is a low-level utility for adding users. To add a user to the group using the useradd command, simply run the following command in your terminal.

Here, the –m flag is used to create the user’s home directory if it does not exist, and the -G flag represents the group.

Open up the passwd file using any text editor, and change the group user id to 0  which represents root permission.

Run the following command in the terminal :

Then modify the following permission for the user whom you want to give root access to.

Here, if you see clearly we have modified line 2 that has the user whom we want to give root access, previously it has a value of 128 which is not a group ID for root. So we modified that line and replace the value with the 0, which represents the root group. After that, save the file and reboot your system.

Here, ALL represents that we are giving all(full permissions) to the user i.e. the user can run any command and the user just has to authenticate.

Method 5: To give root privileges to a user using a script

To give root privileges to a user while executing a shell script, we can use the sudo bash command with the shebang. This will run the shell script as a root user.

Save the above script as geeks.sh, to run the script type the following command in the terminal:

We can use a tool called whiptail to create an interactive dialog box. To install this tool, run the following command in your terminal: 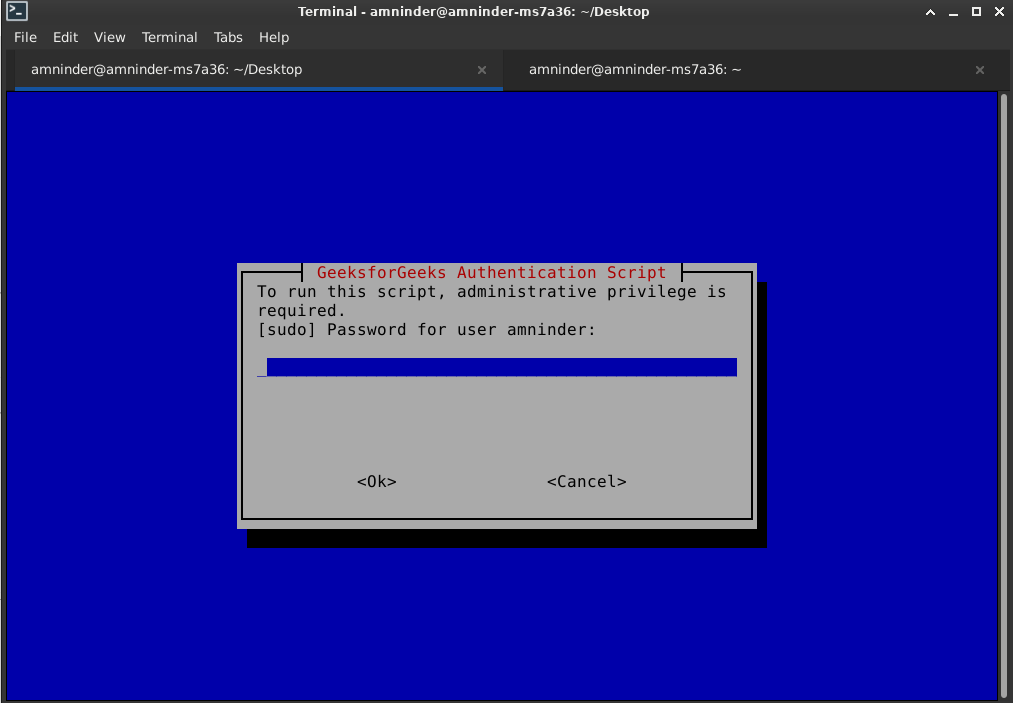 In this script firstly we have created an interactive dialog prompt box for the user to enter the sudo password, then running the script with sudo permissions. Firstly, we are saving the user’s name in me variable for displaying the name in the interactive dialog box. Then using the id command with the if statement we’re checking if the running script is using the root permission, if not we are entering the if statement. Using sudo –reset-timestamp will clear the previously saved credentials and ask for the root password again. Then we have used the whiptail command to add a title, a password box in the interactive dialog box. Here 14 and 52 are the height and width of the dialog box respectively.

If the user enters the wrong password 3 times, we are exiting the script and displaying exit code 1. And after finishing the if block, we can do the stuff that needs root permission. In this script, we are creating a folder after getting root permission.